ECG were awarded the contract to upgrade the heating systems in nine Police Scotland Offices at various locations throughout the West and Central Scotland from Oban to Lockerbie including Tulliallan Police College.

The works involved the strip out of the existing boilers and associated plant including the strip out and replacement of oil storage tanks in Oban and Lochgilphead. Also, ECG arranged the installation of 500Kw temporary boiler plant at Kilmarnock Police Office prior to any strip out works commencing, due to the Police Office remaining fully functional with occupied cells during the course of the works.

The new installations included the fitting of new gas and oil fired high efficiency and condensing boilers along with new stainless steel flue systems. Modifications were undertaken to the existing gas pipework systems to incorporate the Medem gas proving and detection systems, and complete new controls installations with full BMS capabilities with data linkage back to Police HQ were provided.

All works were carried out on time, within budget and to the highest professional standards – much to the delight of the client. 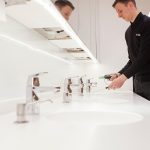